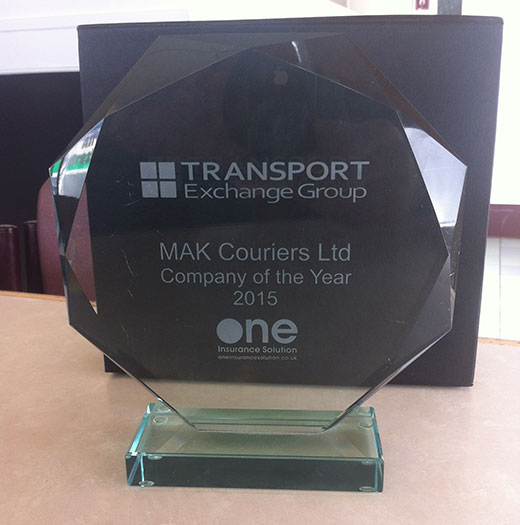 Everyone here at MAK Couriers is celebrating. We’ve just scooped a national industry award that recognises its achievements in courier services over the past twelve months.

We won the Company of the Year category at the Annual Transport Awards 2015 for our local and nationwide same-day delivery business.

The Transport Awards, now in its thirteenth year, organised by Transport Exchange Group,the operator of the largest and fastest-growing freight exchanges within the UK and Ireland. The awards ceremony celebrates the achievements amongst more than 3,500 couriers, owner drivers, hauliers, freight forwarders and logistics providers that are trading over 700,000 loads annually via the platform.

Tony McAndrew from One Insurance Solution presented the award to MAK Couriers’ MD Kam Sandhar at the annual ceremony that took place at St John’s Hotel in Solihull, West Midlands, in front of more than 300 industry leaders and professionals from across the UK, Ireland and mainland Europe.
The company was one of four winners that were nominated and voted for by more than 3,500 members of Courier Exchange and Haulage Exchange in recognition of their major success and best practice in terms of customer service, operational performance and delivery.

Kam Sandhar from MAK Couriers commented: “We pride ourselves on delivering the highest levels of service, so winning this award is fantastic recognition of our ongoing success and the strong relationships we have developed with our valued partners and customers. The Courier Exchange has played an important role in our development, so we are massively grateful to the Transport Exchange Group for their continued support and presenting us with this much appreciated award.”

Lyall Cresswell, Managing Director of Transport Exchange Group said: “I would like to congratulate MAK Couriers for their success at this year’s Transport Awards. They are part of an expanding community of freight operators that are collaborating to tackle some of the most common and difficult challenges facing their industry and ultimately achieve business success.”

We'll be with you within 60 minutes.

Toggle the Widgetbar
We use cookies to ensure that we give you the best experience on our website. If you continue to use this site we will assume that you are happy with it.Ok